The Man I Want To Be 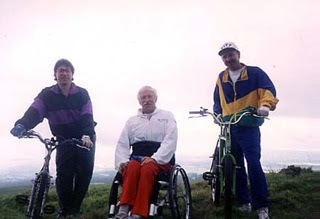 For two years now I've hidden my bicycle away behind amplifiers and buried it under guitars. It's much easier not to think about how good a bike can be for your heart and especially, for your head which as you know from these blogs, can a problem for a musician like me, who is prone to think too much.
But then summer arrived in Vancouver and full of reckless abandon, I pulled out the two wheeler and headed downtown, across a bridge where the gusting wind from the ocean reminded me that Rick Hansen and his team of which I was a part wheeled around the world, determined to make that world pay attention.  And I suppose for a time, it did.  But quickly, I came back to reality when a cop stopped me and issued a ticket for not wearing a helmet while riding my bike.  Despite my best excuses, the cop convinced me there was no way around the rules and while I didn't think guitar players riding old bicycles should get ticketed for being rebellious, I paid the fine but get will justice by writing a song and playing it really loud, every time I see a cop. 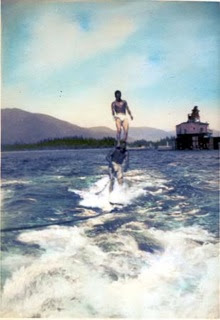 This is a story about a man who never gave up on me when I was rebellious, which has always been part of my nature.  When I was a young, frustrated by decisions in the road ahead and full of angst in a world I was not prepared for, Marshal Smith embraced me, as he did his own children. I remember feeling so calm in his presence. He instilled in me everything I imagined my father might have, had my father lived to see me grow into a man from the child he knew so briefly.

Marshal's family generously shared their father with me. And even today, bike ticket in hand, all these years after his passing, I'm blessed with those memories. I met Mr. Smith just before the Man in Motion Tour began.
Rick knew Marshal was very involved with and respected by the City for his service to Vancouver as head of Parks and Recreation. Most important, Marshal believed in us and opened doors to those who could support and fund Rick's dream. In those early days, Marshal was instrumental for so many reasons.
I'm not sure why it matters, but I want to say the Marshal I knew, was in a wheelchair. By any measure, he and his story are bigger than life. He lost his wife to a fatal illness, he lost two of his five children to fatal accidents and he lost the use of his legs during surgery to repair a chronic injury from the adventure and sports that defined his life. But in the face of these tragic losses, Marshal never let sadness or loss define him.  He was for me and for everyone lucky enough to cross his path, humble, caring and at peace with the world.
Marshal and I became friends after Man in Motion because I suspect , I had the good fortune to date one of his daughters, who remains a trusted friend and for that relationship, I am forever grateful.
I came to know  and to trust him, realizing he was compelled by the idea, we must embrace the world in front of us, never dwelling for too long on the life that might have been. And in that peace of mind, Marshal lived the fullest of lives, powered by a spirit that lives on in his family and even in me, when I'm at my best.
Marshal loved Hawaii and spent his time in Maui, in a house by the sea, in the warm wind that is so intoxicating. He died there peacefully in the embrace of that wind. I knew that magical place well having been his guest. Sometimes, I long to relive those days but the man who taught me so much about what it meant to have a father, would not rest easy knowing I longed for something, I did not pursue.
So it is, I will continue to ride my bike in the warmth of the summer wind. I will abide by the helmet rules and I will deal with the cards life has dealt me by playing my guitar as passionately as Marshal lived his life because when I grow up, I want to be the man Mr. Smith always was.

I wrote this song for Marshal, I hope it says everything I feel.

Don Alder is a musician and partner in a grand adventure - "Man In Motion" that forever changed the way we see disability. He lives alone in a basement suite over run by guitars, note books full of ideas for songs and everywhere, memories of going around the world with his best friend, Rick Hansen.
Share 0 Tweet
← Back to News