I have a show in a few hours. The song list is set.  Guitars and amps are jammed into the tour bus which these days is a faded electric blue Ford hatchback. Clothes for tonights performance will be blue jeans - they are in the dryer as I write and a classic shirt from a vintage shop. The kind Eric Clapton looked so good in at the George Harrison memorial concert.

Then of course, there are my Roy Orbison glasses, which like Roy, I really need to wear. Finally, the hair. It's the same hair I use for everything. Wash it, comb it occasionally and hope the audience is there tonight for the sweet guitar and not just to see me light the drummer on fire - which you might recall reading about in an earlier post.

But back in the days I lived and breathed everything Queen, I fancied myself a bad ass metal boy and thought somehow it would propel our band into the big time, whatever that was.  Living in a small town and having a good imagination was as important as having an identity, even if you had to make it up.  Anyway hearing that Freddy Mercury was coming to Vancouver, the band pooled its money and somehow we bought tickets to the show that by the way, changed my life. 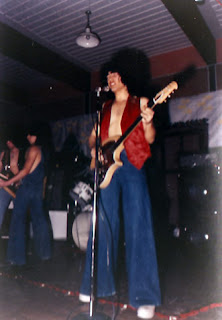 For those few hours at the concert, I was Freddy Mercury, then I was Brian May and then I was Freddy again . When the show ended,  I did something I'm sure at least a million other guys did but won't admit.  I went to a beauty salons and I had my hair permed to look just like Brian May's.  Sadly, my friend and I got styled on the cheap, our hair was burned not permed and it looked really, really bad. Almost like we wearing small animals on our heads

Back home in Williams Lake, the memory of the Queen concert faded away but our big hair didn't . For months we were known everywhere as the Poodle Twins which took its toll on our reputation as a bad ass metal boys.
Freddy Mercury was smart, he keep his hair short in the beginning and he wrote and sang songs that he believed in. That's a good enough reason for me do the same. But I will admit to looking in the mirror now and then and back at the Queen album cover and wondering about how cool Freddy's moustache would look on me.